Swimming with My Toddler – the First Few Days 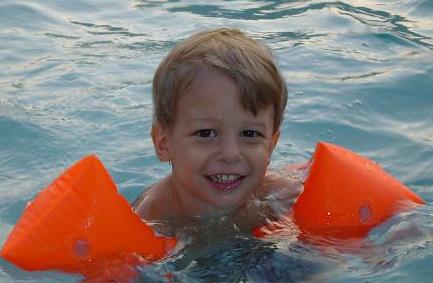 We are fortunate to live next door to a very generous person who welcomes us to use her pool. We do so frequently. Carman and Sudoku learned to swim in that pool, and I hope to teach Doodle (at 2 1/2) to become water safe this summer.

He has been in the pool 3 times so far this season. The first time he was feeling unsure of the water, so I held him the entire time and just got him wet up to his waist. The second time, Rosebud was awake and needing to be held, so I didn’t get in the water at all. Doodle put on water wings and sat in an inflatable turtle and let Carman and Sudoku pull and push him around in the water. He had a great time but never wanted to get out of the turtle – which was fine.

Today started off like the last time but ended in progress being made. At first, Rosebud was being held and Doodle was in the turtle. After a while, Rosebud fell asleep, and I was able to cater to Doodle in the water. He kept his water wings on and let me pull him through the water. He was in water up to his neck. After a few minutes, he relaxed in the water, and blew bubbles in the water for me. Later, I sat him on the top rung of the ladder, held his hands, and he plopped in the water. All the while, I’m speaking calmly to him and praising him for any progress he makes.

The first BIG DEAL of the day was when he stood on the top ladder rung, held my hands, jumped in the water, and got his face in the water. What a big, brave boy! I could tell that he didn’t like the water in his face, but I started praising him as soon as his head came out of the water. He didn’t cry, and I didn’t ask him to do it again. But I did tell him that such a brave action deserves a treat, so he got a much coveted piece of candy when we got back to the house.

The second BIG DEAL was when, after talking with him about how his water wings could hold him up, he agreed to try floating in the water without holding my hands. He did this 3 different times during our time in the water – 2 were of his initiation.

It is important for me to write that he was able to do all these things last summer. After 3 times in the water, he is almost to the point where he was at the end of last summer. – milkmaid

Why I Think Indoor Pools Cause Asthma

to Name, to Love, to Kill