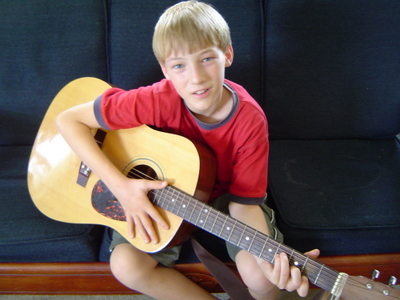 Carman broke is arm about 7 weeks ago. The cast came off early last week.

While the right arm was out of commission, he started learning the guitar, partly to fill up some of his summer time, and partly because we had heard that by exercising one arm, the other would be strengthened too. Maybe working the left arm on the guitar helped somewhat at keeping his right arm toned, but the right arm still felt weak and looked puny when the cast was removed. So, maybe that’s just a myth. ?? Below he’s comparing his arms. Yes, that’s a ball behind his head, not put in its proper place. 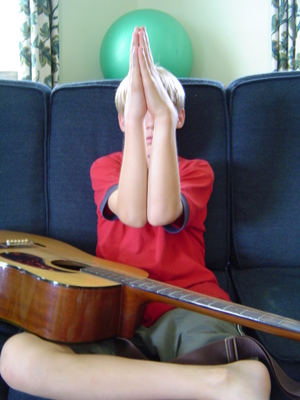 On a happy note, Carman is making great progress with the guitar. He’s learned the following chords: A, a, A7, b, C, C2, D, D7, d7, E, e7, E7, F, G, G7, g. And he can play several songs. He still hasn’t really learned any strumming or picking patterns, but he’s got some good caluses built up and a basic understanding of the instrument.

Now he needs some strumming technique and a good beat. Then he’ll be ready to jam like Jenkees. 🙂