“At such moments I don’t think about all the misery, but about the beauty that still remains. This is where Mother and I differ greatly. Her advice in the face of melancholy is: ‘Think about all the suffering in the world and be thankful you’re not part of it.’ My advice is: ‘Go outside, to the country, enjoy the sun and all nature has to offer. Go outside and try to recapture the happiness within yourself; think of all the beauty in yourself and in everything around you and be happy.’

I don’t think Mother’s advice can be right, because what are you supposed to do if you become part of the suffering? You’d be completely lost. On the contrary, beauty remains, even in misfortune. If you just look for it, you discover more and more happiness and regain your balance. A person who’s happy will make others happy; a person who has courage and faith will never die in misery!”

I read this quote a couple of months ago at Gretchen Rubin’s Happiness Project blog, and it keeps coming back to me. 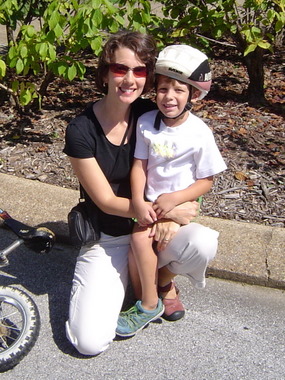 Yesterday was a gorgeous day here. After a couple of weeks of gray skies and rain nearly every day, the sky started clearing over the weekend, and was beautiful yesterday for Doodle’s 5th birthday.

A benefit of homeschooling and being self-employed is that you can take the day off if you want to. We wanted to yesterday, and though we didn’t take off the whole day, we went to our River Park for a walk/bike/skate outing. Rosebud and I strolled along. Most of the time, it looked like this in front of me. 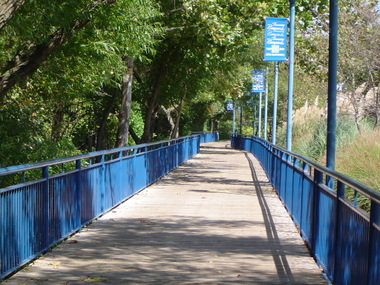 Occasionally Rosebud would get out of the stroller, and it would look like this. 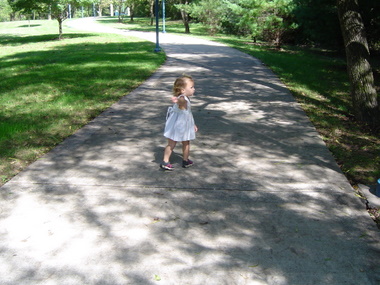 And for a few fleeting moments, I saw the rest of my crew having a grand time. Like this… 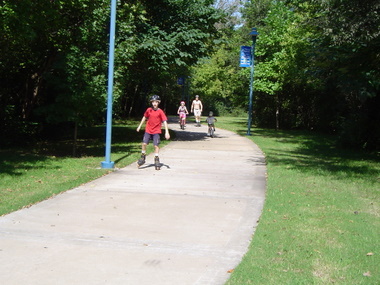 And no, I didn’t mind walking with just Rosebud. The quiet was heavenly.

Later we had cake and opened gifts. Carman and Sudoku gave Doodle cards that he had to read to find his gifts. They all had fun with that.

Hope you had a great yesterday too.

We decided to bite the bullet and get UPC codes for our drawer dividers when I found that we could purchase legit codes for $6 a piece. That way we can get our products into the Home and Garden store at Amazon (where a UPC is required) and out of the Office category (where a UPC is NOT required).

So, if you’re thinking of selling a product in a retail establishment that requires a UPC code, don’t take Amazon’s support’s their word that a single code will cost around $89. By shopping around, you’ll find that you can spend hundreds of dollars on a single UPC through GS1 (formerly the UCC, Uniform Code Council) or much less through a UPC reseller. According to George J. Laurer, the inventor of the UPC, GS1 has grown too big for its britches (my paraphrase), and is now requiring initiation fees and yearly dues in addition to UPC purchase fees (which are determined by the answers you provide to their nosey questions about your projected earnings, etc.) Sheesh!

Luckily for little guys like you and me, some forward thinking individuals/companies made bulk UPC purchases years ago, and their numbers do not fall under these post-2002 guidelines and extraneous fees. They are available for a single low purchase price, with no annual fees, no questions, and the numbers will be yours for keeps.

I know, I know. I was skeptical too until one supplier pointed me to Laurer’s personal website where he explains the whole messy situation and links out to legitimate resellers that he has personally checked out. That’s how I found Bar Codes Talk, Inc.

After making my purchase, I was supplied with my UPC numbers and a copy of my supplier’s certificate from the UCC. More importantly, Amazon is recognizing my numbers as legit.

A downside of all this is that switching stores within Amazon will make us lose our reviews and the beloved buy box. Concerning the buy box, I’ve been told that we should win it back within a month at the most.

Rosebud is potty-trained! She’s been somewhat potty-trained for a while, but accidents are quite rare these days. She often naps dry too. A few weeks ago she decided that she preferred the big toilet to her little potty. So, I’ve put the training potty in the van. It has been a life-saver on more than one occasion. Great work, Rosebud!

Doodle completed the Teach Your Child to Read book a couple of days ago. So today he read Go Away, Dog by Joan L. Nodset, a “Shared My First Reading” book from the My First I Can Read Book series. I’ll have him read simple books we have around the house and ones I get from the library. Hopefully, before too long, he’ll be reading for pleasure in bed before the light goes out.

Carman is 12 today. In our house, that means he receives the journal Marathon and I have been keeping on his behalf. Tonight it becomes his private, personal property. I wrote my last entry today. It’s wild to think that we’ll likely only have him for half the amount of time that he’s been with us so far. Oh my! Time flies.

The Buy Box is Mine!

Yes! We won the buy box for our drawer dividers – all 3 sizes – at Amazon! (Did I tell you we added another size? Customer feedback requested a medium height, so now we have 4.5″ high ones available too.)

I thought I might get a congratulatory e-mail from Amazon. But no. We just *happened* to view our listings last night, and there they were, shouting their eligibility for Super Saver Shipping in beautiful bold font. I had checked our buy box status just a couple of days ago, so this must have happened very recently. Bring on the orders!

The speech club was a couple of weeks ago. This was our line-up:

Sudoku – “Post Haste” by Patrick Winstanley
Doodle – “A Wise Old Owl” nursery rhyme
Carman – “Tell Me a Story,” the suspenceful introduction his Opa gives every time he shares one of his Native American tales. 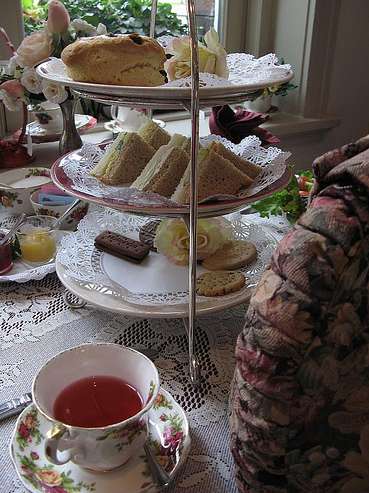 Sudoku’s 10th birthday was approaching, and I was struggling with what to do for her and how to celebrate. Planning a party was really more than I had time or energy to do, but I wanted number 10 to be special and memorable. I thought about having one or 2 friends over for dinner and cake — something low-key, but it didn’t seem quite right.

Then I hit on an idea. An afternoon away. Just the two of us.

Her birthday came and I told to dress up a bit, that she and I were going to meet her cousin and aunt for tea. She lit up.

We left the other kids behind with Marathon, and spent 2 slow, lazy, spoiled hours at The English Rose, an English Tea House downtown. The restaurant is owned by a British woman, and most of her servers are also from the UK with accents to suit. I had to lean in and concentrate when our server was speaking. With real linens, real china, real tea…it felt so…real! We had the Victorian Tea, and while it was pricey…for a small, intimate, girly birthday celebration, it was just perfect.

Sudoku and her cousin were so lady-like, visiting and chatting. My sis-in-law and I were able to catch up and visit too. It was so very refreshing; just what the doctor ordered.

After lunch tea, Sudoku and I headed to the river to do a little window shopping. Then we changed clothes and played in the fountain before heading back to the real world. She claims it was her best birthday yet. It was a day I won’t soon forget.

Would you believe, I forgot to take a picture? Maybe that’s a good sign — that I was living in the moment. Still, I wish I had I captured our outing in digital format…

Update: Chattanooga photographer Cameron Adams graciously granted permission for me to use his lovely photo taken in the English Rose tea room. Pictured is the restaurant’s tiered presentation of the “Victorian tea.” This photo, in my opinion, captures the essence of the venue. Thank you, Cameron.

Marathon and Carman recently did some semi-serious mountain biking. They came home sweaty and pumped about their climb. They did a tick check (found nothing) and showered. All seemed happy-happy.

In the middle of the night, Marathon woke me. Something was irritating him and he couldn’t sleep. After my eyes adjusted to being awake, I checked his ankles, and I could see little, tiny dark dots on him. You’d think they were freckles, except that he doesn’t have many of those. I actually got out Carman’s magnifying glass to get a closer look. They were ticks. I must have gotten about 20 off of him. We woke up Carman and found 2 on him.

A couple of days later, something was irritating me. We found 2 on me too. Thankfully no one has gotten a rash or fever. But these were so tiny – less than half a millimeter or smaller in size – they must have been the infamous deer ticks.

Having a few friends in the area who have had serious battles with lyme disease, I know some of those little critters pack a really mean punch. Sobering thought that so many were in our house.

Before our first homeschool mom’s-night-out of the new school year, when I thought of “classical education,” I thought of stuffy classrooms plaguing young minds with Latin and Greek. Narrow-minded of me, I know, but that was really my impression.

My horizons were broadened at the meeting by a grandmother who had accompanied one the the moms. She had taught science in the public school system for 20 years, and had been turned on to the classical method of teaching after doing some research. Here is a sum-up of her quick overview of the philosophy of classical education…

Classes are comprised of children of all ages. Older kids help younger kids learn. The young children are exposed to ideas and concepts that they won’t understand, but those concepts will be revisited year after year, and their understanding will increase with time. The older kids get to review what they’ve already learned as they help with teaching the younger ones.

When children are young (under 6th grade), they have a great capacity for memorizing. Cram information into their heads, even though they don’t understand it. Have them memorize all kinds of things from poetry to multiplication tables to the classification of animals, to the periodic table. (This teacher taught primarily elementary and middle school science. She made up little songs about all kinds of science facts and lists that her students were not ready to understand. Most were able to sing along with her after hearing the song and reading the lyrics just a handful of times. Years later, 10th and 11th graders would stop by and tell her they were still using her songs.)

In the middle school years, when kids become argumentative and challenging, instead of cramming facts into them, the method of teaching becomes debate. They learn to defend their logic and argue a case. They get to develop the little lawyers inside themselves.

In the high school years, as kids are wanting to distinguish themselves, research and presentation become the means of education.

It seems there is a lot of room to apply and mesh these principles with other philosophies of education. While I still cringe at the thought of teaching/learning Latin and/or Greek (wouldn’t Spanish or even Mandarin be more practical?), I like this teacher’s overall interpretation: cram, debate, and research/teach.