I’m a fan of big stuff. Longest span bridges, tallest dams, and tallest buildings. A mile or two from where we live is the Costanera Tower (or Gran Torre Santiago), the tallest skyscraper in Latin America. At 980 feet, It is a far cry from the 2700 of the Burj Khalifa in Dubai, but seems bigger because nothing near it is close to it’s size. It is almost completed, with construction going at snail’s pace. Financial problems are probable.

Next to it is the Titanium La Portada, Significantly smaller at 600 some feet tall. It is supported by a spring system that allows it to withstand a 9.0 earthquake, one of which will surely happen in the lifetime of the building.

In the evening, around 7:30 to 8, the sun reflects off the Costanera tower and creates second shadows on everything.

The Costanera tower, which has 63 floors, is connected to a huge mall called the Costanera Center, which has 5 floors. The Titanium has 55 floors. Looking at the picture, you can see that the latter has very generous ceiling heights. 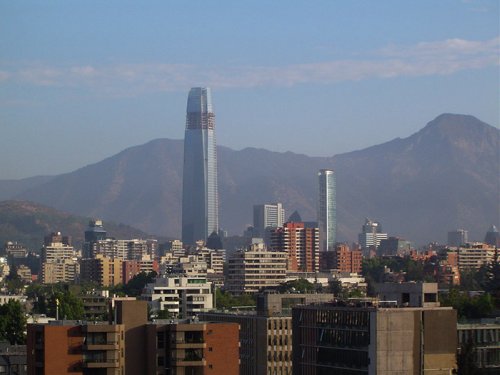 This shot was taken from our 13th story apartment (of course, they call it floor 12). The area you see in the picture is looking straight north, toward the new, unofficial center of Santiago. The government center is south-west-west of us.

In general, people dislike living in high apartments because of earthquakes. At the top, the building rocks back and forth violently. A friend of mine here in the Jardines lives on the 12th floor and he says that a major earthquake back in 2010 actually knocked him down as he was trying to move around his apartment.

I think living on a super high floor would be great, because I have never been in an earthquake of any significance. The third week of our time here we spent in an apartment on the 24th floor. We told some friends where we were staying, and they very seriously said; “aren’t you worried about the earthquakes?”

Valparaiso, a city of 300,000 people on the pacific cost, about 100 miles from Santiago, used to be a very large, economically active city. What event in the last 100 years caused Valparaiso’s major downsizing and a surge to Santiago, with it’s warmer climate and no risk of tsunamis? I’ll tell you in my next blogpost.

Since we talk about it so much….. 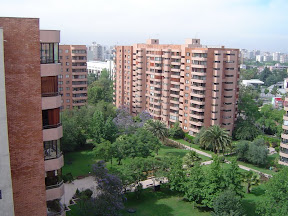 How about some pictures of the garden??? 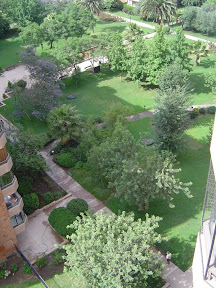 It is about the size of two football fields. 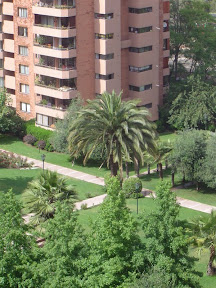 Yes people, that really is a palm tree.

Starting about a week before Christmas, lights that had been wrapped around the trees came on in the evening. 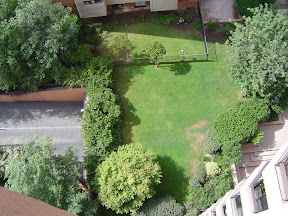 You can see the ramp going down to the 2 (!) floors of parking 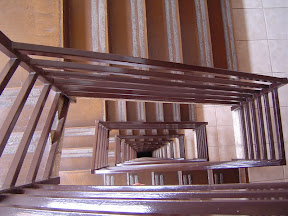 About everyday at 4 o’clock there are a bunch of kids down in the garden playing tag, soccer, volleyball, hide and seek ect. Carman and I go running about every other morning, and this morning 3 other kids went with us. Of course this is their summer break, so after they come back from running most of them go back to bed. 🙂

Each of the 10 entrances (each building has two) has a phone at the door so that you can call an apartment number, and the resident can open the door for you. Almost everyday at least one kid will call to see if we can come down to play. Also the guards can call from the front gate to tell you that you have a guest or delivery. 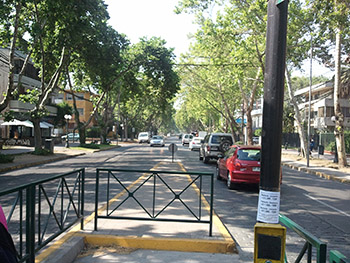 This is looking down Avenida Pedro de Valdivia. Notice the cobblestones.

There are many good choices for transportation in Santiago for people who do not own a vehicle.

Most people own a small sedan or hatchback. There are few full-size trucks or SUVs because of the $8 gas. This is where the companies — like Peugeot, Renault, Samsung, and others that do not meet U.S. auto regulations — thrive.

Delivery vans are usually made by Hyundai or Chinese companies, with small but diesel-fueled engines. Most delivery services, like pizza and other things that are small enough, transport by motorcycle, with a big crate mounted on the back seat. Most of these motorcycles are very cheap 125cc bikes that probably get 100 miles per gallon or more. The riders do pretty crazy things like cut to the front of the line at stop lights and occasionally ride on the sidewalk.

For the lot of people that do not have a car, they must use buses, taxis, colectivos, or the subway.

Another possibility is bike riding. Santiago has many bike paths, about 5ft wide with two lanes. Some people have bikes with gas motors mounted on them. During rush (haha) hour you can sometimes keep up with the cars.

Colectivos are like buses, usually in the form of a sedan, that drive a single route, usually a large road going from one side of town to the other. Thus, they can carry up to 4 people going different places at the same time. You pay by the person, not the mileage, like taxis.

Watching one cycle of the stop light– Looking down a major street with 3 or 4 lanes you see the light turn red. Cars start slowing down. The peatones (pedestrians) start to walk across the road. The juggler runs out in front of the cars and starts his performance. A bus usually ends up in the right lane of the road, the designated bus lane. 2 or 3 motorcycles flow down through traffic to the front of the line. The juggler, with his accurate timing, catches his balls or torches and begins walking down through the line of cars, making eye contact with each driver to appeal for a tip. Shortly thereafter, The light turns green, one last in-a-hurry peaton runs across the road, forcing a couple cars to wait another second. And then they all accelerate. Motorcycles first, buses last with a roar and a puff of smoke.

For the subway and the bus, you have a “Bip” card (pronunced “Beep”) that you swipe when getting on a bus or when entering the subway system. The kids under about 10 just duck under the turnstile and this seems to be expected, normal behavior.

Santiago has a very nice subway system. They have good security, smooth rides, and very clean stations, often with official graffiti or sculptures. The buses are not as nice. They are noisy, and are a major contributor to the city smog. But it is an effective system. Using the bus and metro, you can travel from anywhere to anywhere in the 20 miles+ diameter city for about $1.50

I’ve been thinking more about Viola Ruffner, Booker T. Washington’s high-expectation-employer turned forever friend. I think there are some similarities between her and the NYC Police. Here’s what I mean.

First, some background on Viola. She had a reputation as being a very difficult, demanding employer. So much so, that she had a hard time keeping hired help. She was just too stern, picky, demanding… After Emancipation, Booker T. was hired as the Ruffner’s houseboy.

As expected, in the beginning Viola would inspect Booker’s work and would usually send him back to do it over again, and sometimes yet again. At some point, when weeding the garden, Booker paused before calling Viola to inspect his work…and instead he decided to first do his own inspection.

He did a couple of rounds of this, and when she finally did come to inspect, she found no complaint.

Booker credits Viola with teaching him some of life’s most valuable lessons: diligence, hard work, faithfulness, honesty. She and her husband became supporters of Washington’s work, and Viola and Booker were lifelong friends. (The Ruffner and Washington families are still friends and had a reunion as recently as 2002.)

Now, what does Viola Ruffner have in common with the New York City police?

Have you read Malcolm Gladwell’s Tipping Point? He has a section on the rampant, violent crime that was prevalent in the Big Apple in the 80’s. Crime rates dropped dramatically when the police established a no tolerance plan against subway turn-stile violators. By taking a firm stance against small infractions, overall crime – especially violent crime – greatly diminished.

By sending a clear message about the little things, a message was also sent about the large things.

The Rules of the Game

Futbol (soccer) is very popular here. From about age 8 and up, the average boy plays at least an hour a day. No one is too “lazy” to play soccer. Even the most unofficial pick-up games have nearly complete rule enforcement, Goalie gloves, and cleats. The kids here have skill levels and ball tricks that you don’t see in the U.S. They play very hard but high-class, there is very little hacking at the ball or body contact, and good passing.

In the jardin, many kids play soccer, destroying the grass, and once in a while breaking a light. For goals, they usually use a tree as one goal post and a cell phone or another soccer ball as a marker for where the other (imaginary) one is. If the ball goes through the posts but is too high, the goalie will shout “altura!” (height).

The conserjes (guards/groundskeepers) who maintain the apartment complex don’t like it. They get complaints from older people who dislike the jardin having patches of dead grass and flying soccer balls that occasionally hit people.

We are next to a large and well maintained public park that has two soccer courts (with concrete, not grass), but they are almost always occupied.

The conserjes make threats to fine people if they continue playing, but, as far as we can tell, they never do.

The same is true with water balloons and the splashing in the fountain.

The Chileans are like that – lots of rules that are not enforced.