ViÃ±a del Mar – the Pretty, the Surprising, and the Ugly

The pretty – ViÃ±a is know as the “Garden City.” There are flowers everywhere. Water trucks slowly drive along, watering the trees and grass. It seldom rains here in the summer, so they have to work for all the green they have. And work they do. As you enter the main city block, you can see this on a hillside: a clock of flowers. It works! Pretty, huh? 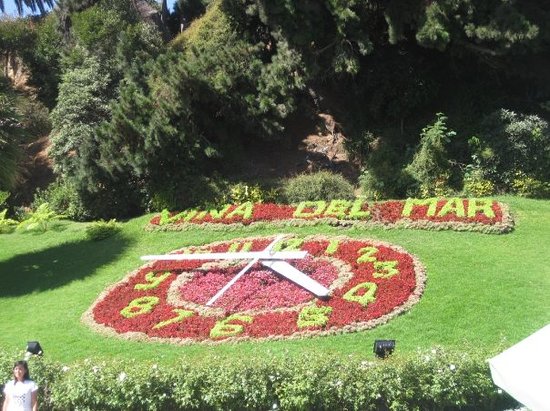 The Surprising: The first night, as I mentioned, we went to Diego’s Pizzeria. A couple of restaurants down was a Pizza Hut. As we walked past the American Pizza chain after our Chilean pizza meal, we gringos stopped dead in our tracks. Looking into the big picture windows of the crowded Pizza Hut we saw two flamenco dancers, dressed in traditional flamenco dancing garb, complete with swirling skirts and wide high-heels going to town, dancing, stomping, and clapping all around the restaurant. It was mesmerizing. A man was in a corner playing a…was it a guitar? A woman was singing heartily beside the guitarist, and the two dancers did their thing. Right there in Pizza Hut of all places! It was awesome. When the dance ended, we asked if the flamenco was a traditional Chilean dance. Goyo laughed. No, it’s Spanish and is not typically seen in Chile. He suspects it’s more common in Mexico.

The Ugly: As we were walking to the cars, some folks were partying on their open balcony. As we passed on the sidewalk nearby, someone yelled, “Do it now!” (in Spanish, of course.) Sudoku looked up to see the contents of a bucket of beer rain down. Andrea and Javier got the biggest splashes on her head and his shirt, but Sudoku got splashed in her eye. Which burned. Plus, she and they smelled like beer. The partiers were scolded by other passersby, making threats to call the police. Goyo complained to the condiminio’s establishment. But we were tired and smelled like beer and just wanted to clean up and go to bed. So we did. Goodnight, ViÃ±a.