The two polar opposites of wheeled transportation: the bus and the bike.

The bus driver, a government employee, drives his route for the eight-thousandth time.

He recently “graduated” to a higher position, and is now driving a caterpillar bus (the really long three-axle kind that pivots in the middle).

It’s all he can do. It’s all he’s motivated to do.

He gets his paycheck either way.

He’s driving east on “Matta” a large eight-lane avenue. A taxi cuts him off in order to pick up someone. Several blocks later, he crosses VicuÃ±a Mackenna and enters a new district. “Matta” changes to “Grecia”.

The bus lane begins on the left side of the road. Ahhhhhh…. he merges into it and picks up speed. On his left, three lanes full of cars. In front, a single lane separated from the rest of the road by a concrete barrier and empty for as far as he can see.

The cyclist rides between the long lines of stopped cars on his way toward the intersection.

A car’s door suddenly opens. He brakes hard, and stops two feet from the door. He glares at the person getting out.

The road’s dangerous, but not as much as the sidewalk.

Trying to ride 20-30 mph on the sidewalk is suicide.

He’s riding south on Pedro de Valdivia in the Ã‘uÃ±oa district. He comes to the front and promptly crosses the intersection even though the light is red.

Chuckling at the inflexibility and comparative paralysis of cars, he accelerates to a fast cruise. Looking back, he sees that the light has turned green. The cars slowly gain. He does a short sidewalk stint to avoid the first vehicle to pass him in the right lane, a dump truck.

A minute later, he gets to “Grecia”. He’s going to turn left here, onto the bus lane. Onto that wonderful car-free, pedestrian-free path that leads right to where he’s going.

You can probably guess how bus drivers feel about cyclists. They won’t run over a cyclist, but they aren’t exactly happy to see one in the bus lane, and you can tell by the way they handle their face and the horn if you ever get in the way.

It’s understandable why bus drivers feel the way they do. They’re piloting a huge machine, usually full of people, in a special lane specifically dedicated to expediting the passenger’s commute.

And some joker on two wheels is in the way.

Sometimes, on a bike, you catch up to a bus that’s taking passengers. Passing one is usually a terrible idea unless you have an easy escape up ahead.

I check behind myself for buses every thirty seconds.

I’ve had one bus catch up to me before. That was my first time on a bus lane. It never happened again.

This is what happened this morning, when I went down Pedro de Valdivia and got to Grecia.

I merged to the right and came to a stop on Grecia’s median. I waited for Grecia’s light to turn green so I could start down the bus lane headed east. A bus came from the west and pulled up next to me. Then the pedestrian light started blinking.

The bus driver looked at me and waved toward the far sidewalk, as if to say “go ahead and cross, your time’s running out”.

I paused for a second or two, sizing up the situation. Then I smiled, shook my head, and gestured down the bus lane to the east, as if to say “no, I’m gonna ride in the bus lane”.

The reaction I got was not what I expected. He leaned back and laughed, and gave me a thumbs-up as the bus started moving.

There are some understanding characters mixed in among the seemingly hardened and unforgiving bus drivers of Santiago.

P.S. – Of all the roads in Santiago, there’s none better for cycling than Santa Rosa Avenue. Normally there are just two lanes running opposite ways that are separated by a median of some type, meaning that there’s no escape if a bus gets behind you. Not here. With four lanes all connected, avoiding buses is as easy as noticing them.

(I don’t know what the deal is with the buses on the left. They’re probably about to turn right.) 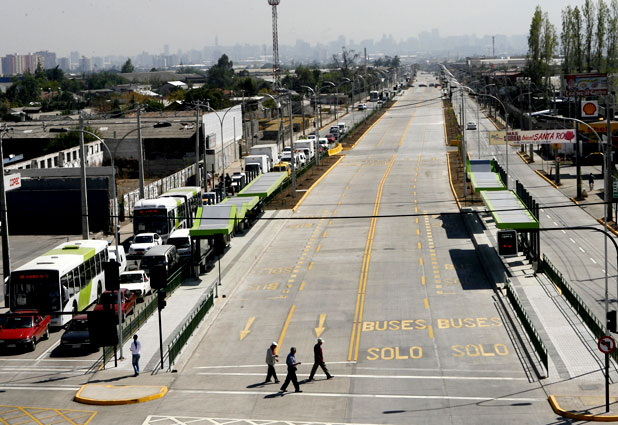