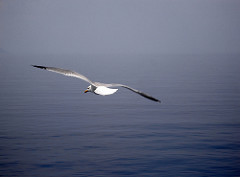 Around 8AM today, Sudoku and I turned away from our screens and looked at each other quizzically. Outside we could hear a strange bird call … and it was loud!

I couldn’t identify the call, but, once I saw the distinctive birds, I immediately remembered. Sea gulls.

Four medium/large birds, somewhat paired into two sets of two, were circling our neighborhood, finally landing on some of the roofs below us. While they were still in flight, I noted the striking bright-white underbellies of the birds and the distinctive wing profile. Also, when they landed, they came down in a way that I associate with seagulls. They have white heads also, but the rest of the body appears grey at rest.

They are too far away for my pictures to be helpful, but I’ve attached two images of what I’m pretty sure I’m seeing. 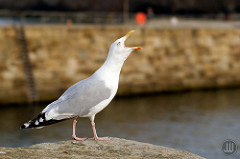 We basically live with our deck doors and windows open except in the winter. Last summer we removed the deck doors entirely for the whole summer, essentially living and working on our porch. This is our 4th summer in this area. Point being, we’re very aware of our neighborhood and especially any animals that come around. This is pretty unusual. I think I vaguely remember it happening once before.

So, I’m wondering: what would make them come this far inland now (middle of the summer here)?

I posed the question to Doodle, and he had an intriguing theory.

“Maybe people aren’t leaving as much food at the beach this summer because fewer people have gone to the beach because of the problems .”

For what it’s worth, attendance at the nearest beaches (about 100km away) has been way down this summer because of las marejadas (heavy wave action, even getting up into the city at high tides) and la fragata portuguesa (a nasty jellyfish that has been a sporadic problem up and down the coast for at least the past few years).

Another theory: mating. They are paired up, as mentioned above.

It’s now 10AM and one pair of the birds has vanished while I was typing. The other pair is still in the same spot, and they’ve just been standing there ever since they landed. That roof is going to get hot soon!

Thanks to Ava Babili and James Whitesmith, respectively, for the images.

The Heroic Entrepreneurship of Mary Emma and Company