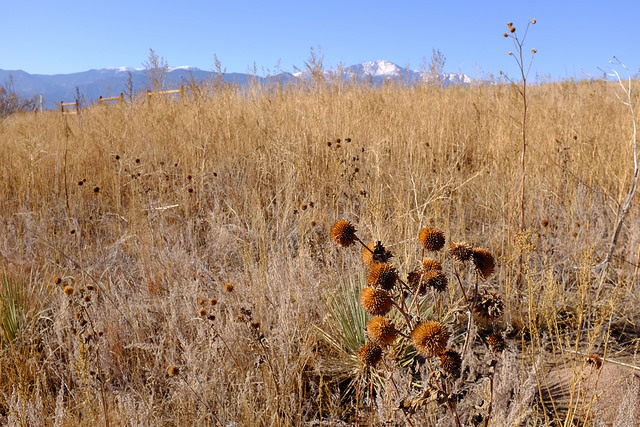 Tonight, just before supper time, 10 year-old Rosebud pulled up to the piano to play the song she had been working on today. It was “Yellow Ribbon”.

After playing it, she announced the title of the piece and both Sudoku (17) and Doodle (12) got quizzical looks on their face.

“But Dad, that’s not the way Zeb sang it!” they each said in their own way.

I was staring back at them like they were crazy.

It dawned on me that, in their memory, they had actually heard the big, calm cowboy Zeb, riding on his small horse, sing that tribute to Pike’s Peak as the herds slowly wended their way through the ravines, in sight of the summit.

…when they were riding along with him back in about 1910.

Though I’ve probably read only 1% as many books to the kids as their mom has, I make up for it with my energy and craziness.

When I come to a song in a book, I sing it! If I don’t know the tune, I make one! I march along with soldiers, do one-person re-enactments of bar fights, throw things, bite myself … okay, well, I’ve never actually done that last one, pretty sure. But you get the idea.

Anyway, when we were reading this a few years back, I did the best I could to sing the Yellow Ribbon tune, but I missed it by … a fur piece.

Nonetheless, I sang with conviction, and I imitated the drawl that Zeb was said to have. And, since that song appears many times in the text, my kids became quite familiar with my version.

And, magically, the kids heard Zeb himself singing through me. Like they were going back in time.

As Hank, Zeb’s crotchety old compadre would say in his geezerly whine, “Back in my day, …”

[thanks to Flickr’s brando.n for the shot with Pike’s Peak in the distance]

This weekend in Providencia we had snow and expectations of a hard freeze on the following night. We were closely watching the forecast for that night from as long as a week beforehand. At one point we saw a prediction of -9Â°C. I’m pretty sure that would have broken the record low temperature for Santiago.

As we got closer to the day, the forecasts moderated somewhat, and, the evening before the expected freeze, forecasts were saying -3 or negative 4 degrees Celsius. That’s still quite cold for here — probably would be the coldest temp of the winter.

We have an exposed laundry room (known here as a logia) that has a head-high concrete wall around it on the two exterior sides — from there up to the ceiling it is open. The wall is 6 or 7 inches thick. The plumbing for our washing machine and an adjoining sink runs inside of that wall, so it was going to have the outdoor temperature on both sides of the wall/plumbing. I was pretty nervous about how to handle the situation. I could run a trickle of water from all those taps, but some of them like to “turn themselves off” when you walk away.

I was also concerned about needing to completely drain the washing machine and the hot water heater, and I would need to think about the vegetables and reserve water that we store in that area.

Doing this planning took my mind back many years to memories of a hard freeze we had in Chattanooga when I was a child.

We had just moved south. All of my family history comes from the great plains, the northern Midwest, and Canada, so my dad knew plenty about how to handle deep freezes. But it turned out that the waterline to our house was not buried deep enough. I suppose if we had been running a trickle of water inside the house (for all I know we may have been), that might have been enough to keep that main water line from freezing, but clearly that was not his fault.

I remember the hardships of digging and hacking at the frozen soil to pull up the burst pipe and then to bury another one deeper. I was too young to actually be a help, but I was too old not to be out there trying to help. Tempers were short. Icy mud was aplenty. There was a sense of urgency, for some reason, as I recall.

In thinking of this, I just realized it was one of the only memories I have of seeing my brother work or working with him. (I did see him play the piano for my Dad’s evangelistic meetings, but that’s not the kind of work I mean.) He would have been 13 or 14 at the time — a lot older than me.

The memory instilled in me a healthy fear of freezing pipes.

My other big burst-pipe memory comes from about a year after Milkmaid and I were married. We were living in a basement apartment and we were about to walk out of the apartment and head to a family holiday gathering when suddenly water began to pour down through the ceiling into our apartment.

It turns out that the renters above us had made the mistake of closing their laundry room door. The consequence of this was that the warm air from the house was not able to keep the plumbing lines from freezing.

It seems like a very bad time to have such a thing happen, but of course there is never a good time for such things.

So, back to yesterday in Chile, I decided to do nothing and simply check on things as the night progressed. I felt that -4Â°C might not be enough to freeze anything in just one night.

During the night, I made a happy discovery. I realized that the â€œheat envelopeâ€ around our large apartment building was very significant, and our laundry room was not going to go below freezing.

Here is my rule of thumb going forward:

On the higher floors of a large residential building here in Santiago (this particular one built in 2000), it seems that you get a thermal bonus of about one half Â° Celsius or 1Â°F for every floor below you. So if you were on the 11th floor, the temperature outside your windows on a cold night could be expected to be about 5Â°C above the street temperature.

These numbers would not work for a well-insulated building, but, because Santiago typically only drops below freezing a few times a winter, the insulation is poor and a lot of heat is lost from the windows (and walls?) on the lower floors.

I knew there must be some effect like this, but I had no idea it was so large. There must be great plumes of heat rising from all the large buildings on a cold night.

So for anyone thinking of living in Santiago, I recommend that you prefer the higher floors if you are on a tight budget like us. LocalsÂ  tend to dislike the higher floors because they get more earthquake action.