A few weeks ago, there was a sculpting competition in a sculpture park about two miles away from where we live.

The whole competition took about a week. Each person got handed a big block of marble and were told to carve something out of it.

We first found out about it because Marathon, Sudoku, and I were taking a bike ride up Cerro San Cristobal. We decided to really explore the sculpture park for the first time.

While we were there, we noticed there was a lot of whitish smoke. Then we saw a big tent set up and all the people with their big pieces of marble. None of the sculptures were very clear yet. We decided then that we would want to see when they were done.

As far as we could tell, there were about 20 sculptors, each one making one sculpture. (A few of them had helpers.)

Below is a list of a third of the competitors. This is one of three lists that were there. (Notice the guy from Taiwan! Listed as “Taipei, China”.) 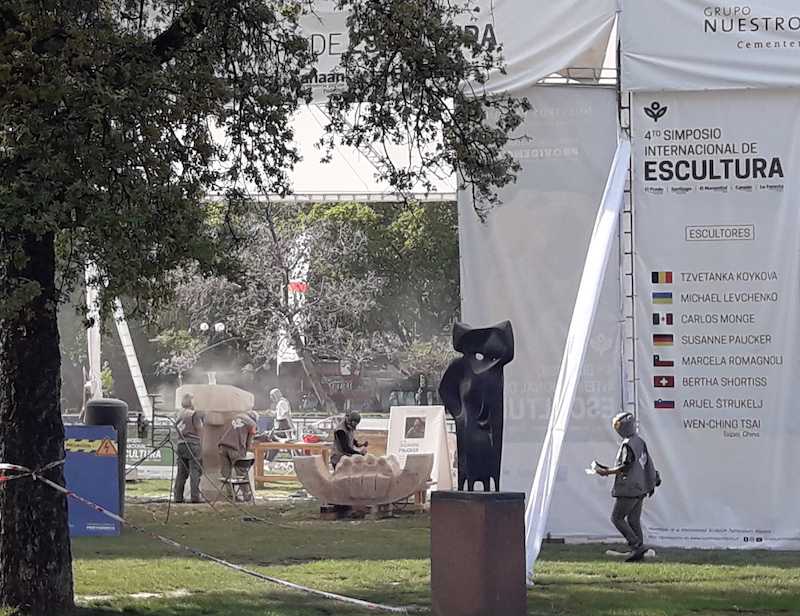 We — all but Mom — took a bike ride down there two Sundays ago–Marathon, Carman, Sudoku, Rosebud, and me.

The sculptures were pretty amazing. There were a few at the end that had granite, but apart from that, they were all marble.

Here’s a slide show of some of the works.

Dad’s favorite part was the textures. Some sculptures were glossy smooth while others were rough and chopped at wonky angles as if to resemble age.

Now I’ll get to the particulars.

One looked like a guy frozen into an ice block. The whole thing was smooth, all in one piece. The guy looked like he was trying to get out, but most of his legs and part of his arm was stuck.

One was like a bunch of plates stacked on top of each other.

One was a big waviness with a bunch of writing in small letters going around it at the base and up the waves to the top.

Another was what looked to be a Greek/Roman guy with a blindfold and a sash that read, “OMNIA VINCIT AMOR”. That was my favorite.

Another was like one of the water things that you sometimes see in parks, with all the little pools, with a trickle of water flowing slowly down from each pool to the next. The water was also made of marble.

Another was like ten people sitting on a boat.

Another was a pregnant woman. This one was cool, because it was all rough in the back, and slowly changed to smooth in the front. None of the other statues had this.

Another was like a jet scooter, with granite handle bars. Most of the granite parts were cylinders. Marathon said this was done with a hole saw.

Another was an A, but with waviness on it. This was Marathon’s favorite.

Well, we got back from our bike ride and told Milkmaid how awesome they were, but that she would have to see them for herself.

About a week later, Milkmaid, Sudoku, Rosebud, and I went back to the sculpture park, but already most of them had been taken away to different parts of the country.

Seen ‘about the town’

Humanity has recently passed another amazing milestone: inexpensive phone cameras are now better than the human eye. In other words, most of us are now walking around with a tool that can augment our vision.

For me, this happened with the new phone I bought about 10 months ago. Slowly over those months, I realized the power of the camera. The phone is a middle-of-the-line Samsung.

It helps that I’ve been taking pictures, amateurishly, for about 15 years now. I’ve been squeezing my old Sony Cybershot for every bit of performance it could give me. So when I got a new camera, I knew how to push its limits.

It also helps that my work sometimes involves taking pictures of fine details.

With all that said, here are some of my photos from the last few months.

Neurons! (As seen through a glass bead.) 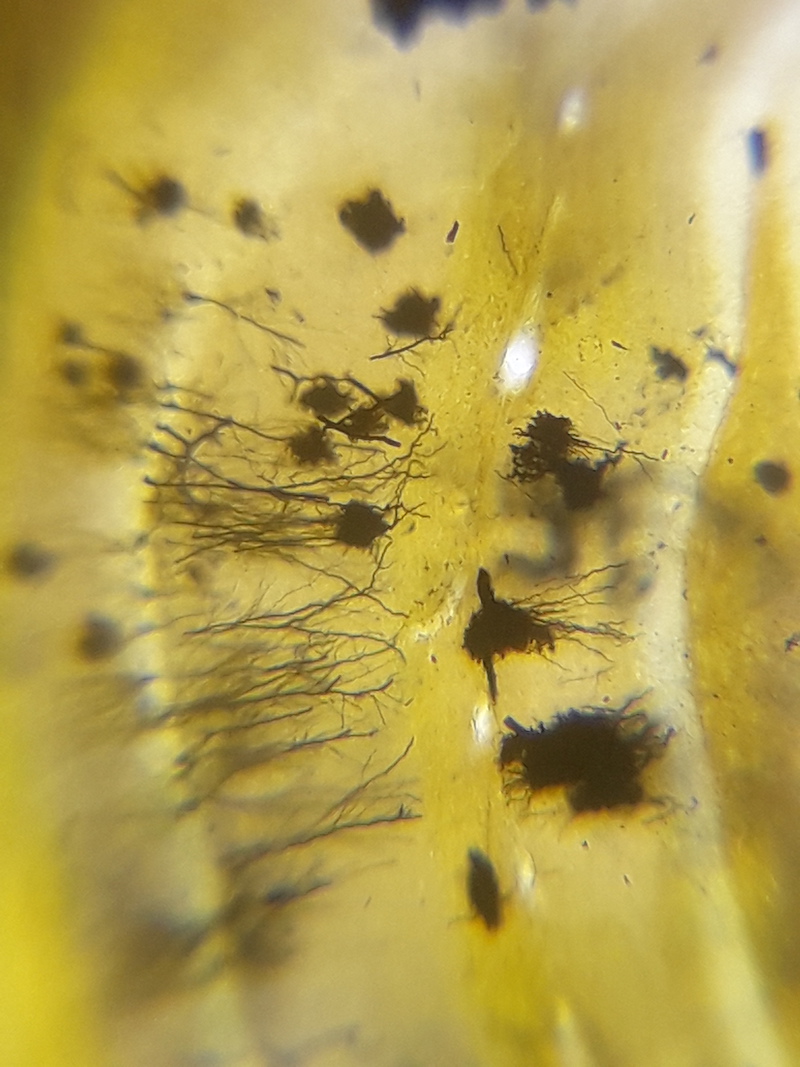 This is Hark. He’s our local herald angel. Any guesses as to how we got this shot? 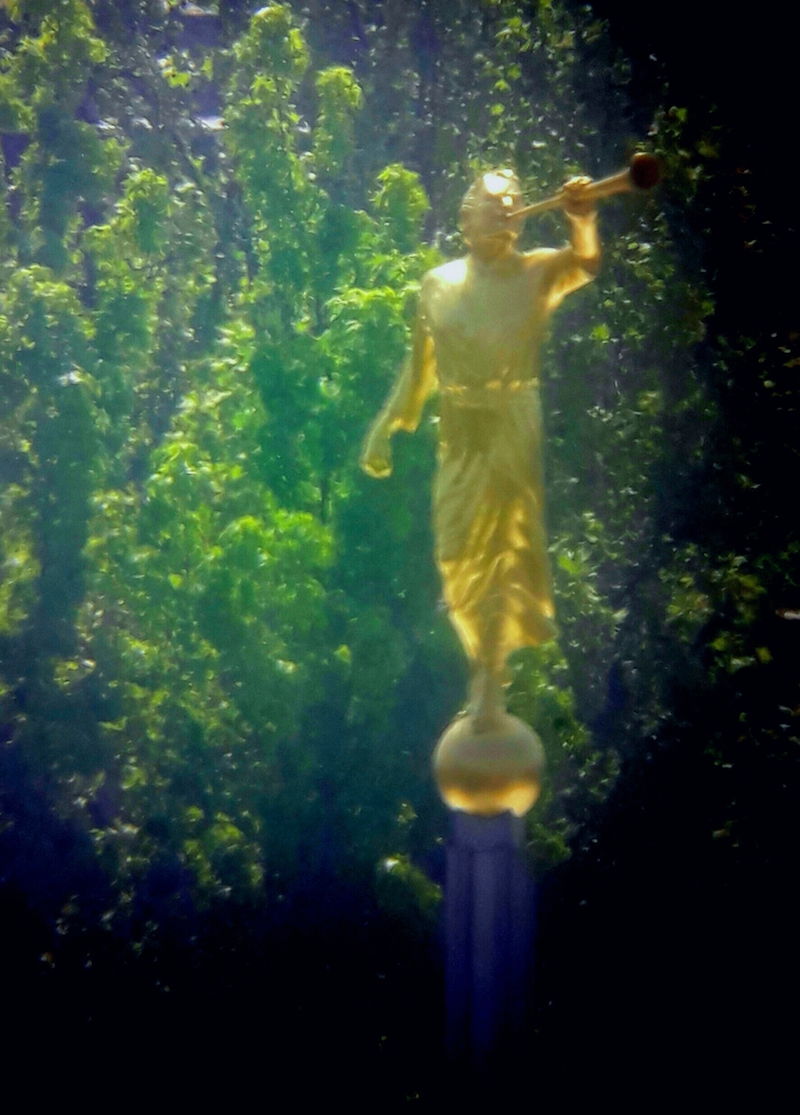 This mysterious photo of the Costanera tower was not edited. This is exactly how it looked. 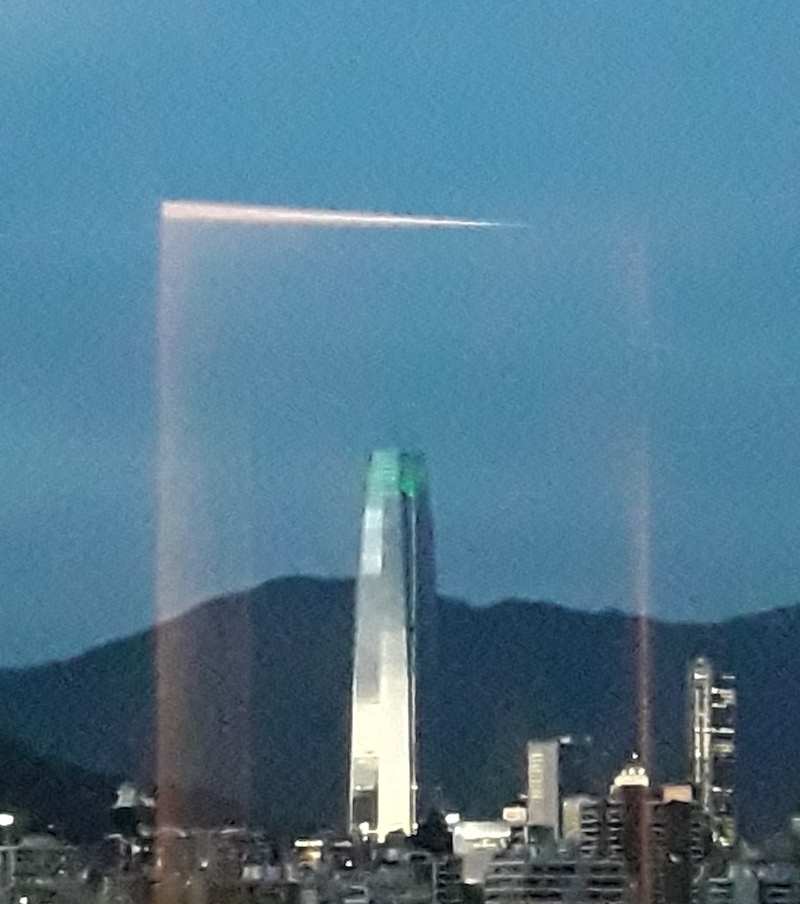 On the left is my phone, with the help of a lamp from our living room. On the right is a professional camera taking a photo of a penny inside a “light box” — supposed to be great for bringing out the detail for small object photos.

Bottom line: the magic is probably already in your hands. Go out and take some great pictures!