If you’re riding hard, where’s the best place to be? Obviously not the sidewalk, and really, not the bike paths either.

There are several disadvantages to bike paths: they typically run along the sidewalk and merge with them when you come to an intersection, at which point you are waiting in a crowd of pedestrians and have to dodge around them once the light turns green. Sometimes walkers or joggers will use the bike path. There are sometimes blind turns around bushes or trees on a bike path, preventing high speed, and every side street you come to you have to slow down in case a car is coming out of it, and can’t see you, because you’re still 30 feet away, going 30 mph. Not good.

Riding on the road with the cars is a decent option, but the most dangerous. In this case the slower you ride, the more cars are whizzing past you. Cars whizzing past you is not a good thing. In some cases you can ride as fast as the cars, but it’s still dangerous.

So what is the answer? The bus lane.

Some major roads around Santiago have a separate two-way section only for buses. It is in the middle of the road, separated on the sides by a fence or reflectors…. as shown below on VicuÃ±a Mackenna, 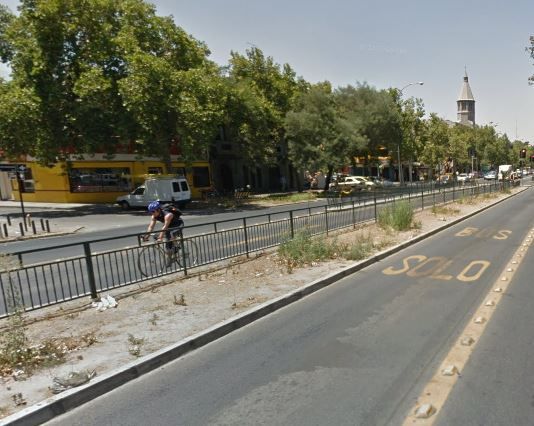 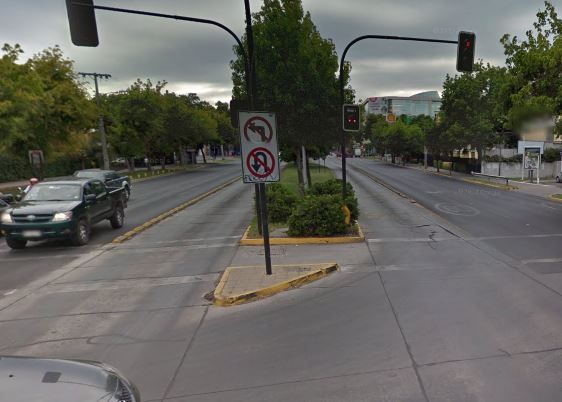 and on Pajaritos. (Note: Google’s camera car is driving in the bus lane!) 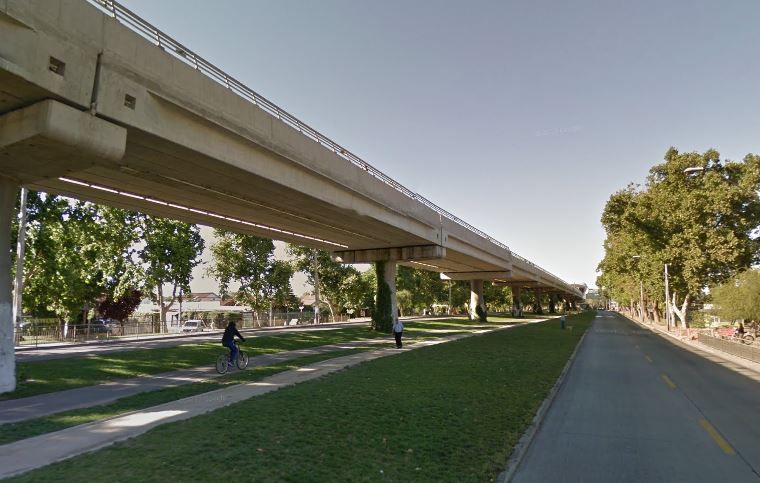 Because these lanes are only on the biggest roads, the only time you have to stop is when there is an intersection with another major road. Side streets don’t hinder you at all. Nor do pedestrians. There is one problem: the buses. When they are on these lanes, the buses drive fast. And the driver will get mad if anyone slows him down. There is not space for a bus to pass a cyclist. And because the blocks are so long, if a bus gets behind you you’re in trouble. It happened to me once.

I suddenly heard a bus close behind me, and my options were: slow to a stop and squeeze against the fence to let the bus pass (there was no dirt median where this happened), or ride like the devil’s after you. I chose the latter.

I am now somewhat paranoid– I check behind myself every 30 seconds to make sure no buses are in sight.

If you play it right, it doesn’t get any better than the bus lane.